This will help you talk with your doctor to decide the best treatment options for you.

What is a biomarker?

A biomarker is a substance that doctors can measure in tissues, blood, or other body fluids like spit. In ALK cancer, biomarkers are changes in a cell’s genes (building blocks of a cell’s DNA) or proteins that cause the cancer to grow. These mutations are called “driver mutations” because they cause (or “drive”) cancer to grow.

ALK stands for anaplastic lymphoma kinase. ALK is a type of gene that exists in all of us. The ALK gene makes a protein that is involved in cell growth. Changes to the naturally occurring ALK gene can cause cancer.

The fusion of these two genes produces an abnormal (changed) ALK protein that causes cancer cells to grow and spread.

While the ALK gene is naturally occurring, the gene fusion that causes ALK-positive NSCLC isn’t a hereditary mutation; people with ALK-positive lung cancer are not born with mutated ALK genes and didn’t inherit it from their parents. Their mutation is considered an “acquired mutation,” which means the fusion occurred due to a variety of possible factors, such as exposure to carcinogens.

Who gets ALK-positive NSCLC?

People with the ALK fusion tend to be younger than the average person with lung cancer; the median age at diagnosis for people with ALK-positive NSCLC is 52 years. It is also common in nonsmokers or light smokers and those with lung adenocarcinoma. It has rarely been found in patients with squamous cell lung cancer.3

About 5% of people with NSCLC in Western populations have tumors with an ALK fusion. 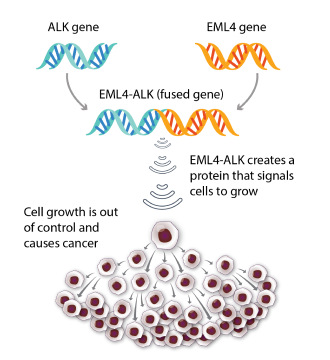 ALK fusion happens when the ALK gene fuses (joins) with another gene, such as EML4. The fused gene sends signals that lead cells to grow out of control, which means 1 cell divides into many cells and causes cancer.

How do I know if I have an ALK mutation?

If your biomarker test shows you have ALK-positive NSCLC, your doctor may refer to it as an ALK mutation, ALK biomarker, ALK fusion, ALK rearrangement, or ALK-positive lung cancer.

How do doctors treat ALK-positive NSCLC?

You will work with your doctor to decide on the treatment that is best for you, based on your stage of ALK-positive NSCLC.

Currently, ALK-positive NSCLC is most often treated with targeted therapy, which is a type of treatment that finds and attacks certain parts of cancer cells and the signals sent to cancer cells that cause them to grow uncontrolled. They prevent the growth of cancer cells only, and do not harm healthy cells.

What are some side effects of ALK-positive NSCLC treatments?

Side effects of the ALK-positive NSCLC treatments differ by drug and by patient.4,5,6,7,8 Some common side effects of ALK TKIs include:

Among the more serious but less common side effects of ALK TKIs are:4,5,6,7,8

In addition, crizotinib (Xalkori®) has unique vision-specific side effects. These include:7

Low testosterone is one source of fatigue in patients being treated with crizotinib (Xalkori®). This can also lead to sexual dysfunction and depression.9

Learn more Get tips on managing treatment-related side effects.

How long do people with ALK-positive NSCLC take targeted therapy? 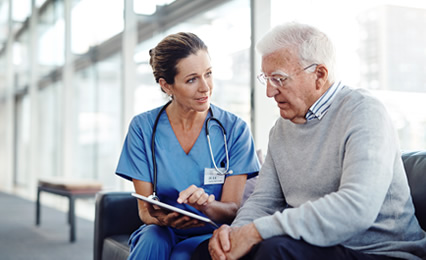 Your cancer may be effectively managed with a targeted therapy for years with limited or no progression (cancer spread).

Unfortunately, after an initial positive response, many people with ALK+ NSCLC develop drug resistance to the therapy, meaning the drug stops working and their cancer begins to grow and spread again.

Luckily, ALK-positive NSCLC has a number of FDA-approved drugs, and patients are often able to switch to a different drug once one stops working. Your doctor will likely recommend a rebiopsy (a second biopsy of your tumor tissue) to determine what is causing your resistance before recommending another drug.

Many research efforts are underway to understand drug resistance and find ways to combat it. For example, researchers are looking at various drug combinations (using multiple drugs to treat your cancer) that may help delay or prevent resistance from happening.

Click Here to learn more about recent efforts these efforts to combat drug resistance and develop an ALK vaccine.

ALK-positive NSCLC does not seem to respond to immunotherapy, which is a type of treatment that helps your immune system find and attack lung cancer. Researchers are actively exploring ways to open up immunotherapy options to patients with biomarker-driven NSCLC, including efforts to develop an ALK vaccine.

What are other treatment options for ALK-positive NSCLC?

Other treatment options include chemotherapy, radiation therapy, and clinical trials. Each time you have to make a new treatment decision, be sure to talk to your doctor about your options, including discussing your goals for the treatment and possible side effects of your options, to determine the best treatment option for you.

Talk with your doctor to understand your ALK mutation and type of cancer, and to make a treatment plan together. Bring a pen and paper or use your cell phone to write down your questions and your doctor’s answers. You might start with these questions:

Find More Questions to guide your discussions with your doctor.

How is NSCLC with ALK mutations treated?

The treatment options for non-small cell lung cancer vary based on where the lung cancer is located within the lungs and the stage (whether the cancer has spread or not) of your NSCLC diagnosis. You will work with your doctor to decide on the treatment that is best for you, based on your type and stage of NSCLC and your biomarkers.

Below are some common treatment options for people with ALK-positive lung cancer.

Chemotherapy is a treatment that uses drugs to stop the growth of cancer cells. Chemotherapy also attacks healthy cells.

Targeted therapy is a type of treatment that finds and attacks certain parts of cancer cells and the signals sent to cancer cells that cause them to grow uncontrolled. They prevent the growth of cancer cells only, and do not harm healthy cells. 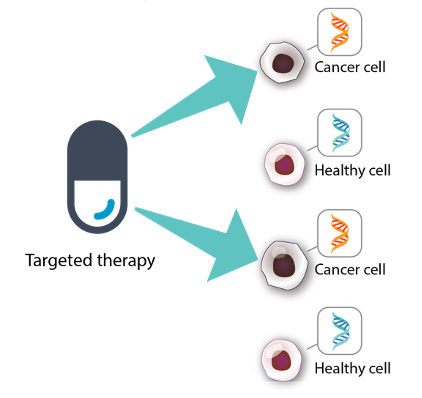 Immunotherapy is a type of treatment that helps your immune system find and attack lung cancer. It is already a standard of care treatment for some patients with ALK.

Talk with your doctor about taking part in a clinical trial for a new, possible treatment. Clinical trials are an important option for people with ALK because the newest treatment approaches, not available otherwise, are being tested in them.

For example, researchers are currently testing cancer vaccines and lab-made immune system cells (cells that find and attack cancer) that will target driver mutations in ALK.

Palliative care does not treat lung cancer directly. The goal of palliative care is to improve your quality of life while receiving treatment. It prevents or treat the symptoms and side effects of the disease and its treatment. It also helps you manage emotional, social, practical, and spiritual problems you may face.

Talk with your doctor to understand your type of lung cancer and to make a treatment plan together. Bring a pen and paper or use your cell phone to write down your questions and your doctor’s answers.

Tip: Print these questions out and fill in the answers with your doctor. Having this sheet on hand can help you to remember the conversation and plan for any next steps.

In this presentation, Upal Basu Roy, PhD, MPH, LUNGevity's executive director of research, speaks with Justin Gainor, MD, about what people with newly diagnosed ALK-positive lung cancer should know. Dr. Gainor is director of the Center for Thoracic Cancers and director of targeted immunotherapy at Massachusetts General Hospital.

News in the Community

We make it easy for you to stay current with the latest news in lung cancer.

You are about to leave the Patient Gateway

You’re one click away from learning about one of our most valued sponsors. Read about how they’re making a difference in patients’ lives.

Whether you're living with lung cancer, or caring for someone with the disease, online groups and biomarker-specific communities can offer much-needed support.

Participating in a research study may offer additional treatment options for those who are eligible.

Get the latest news in lung cancer—from research advancements to local events—to help you manage your ALK diagnosis and treatment.